Help – I’m in a Double Bind and it’s Holding Me Back!

Does this sound familiar? On the outside, to a casual observer, it looks very much like you’re committed to that goal, dedicated to bringing about that change, determined to crack that habit. But you try and try and try… but you fail again and again and again. Maybe you haven’t the faintest clue why. Or perhaps you suspect there’s an unhelpful, hidden self-limiting underlying belief that’s actually running the show.

It isn’t unusual. We have the best intentions but we get caught, and somehow we don’t follow through. Some of us know what our big, unhelpful assumption is, but most of us don’t have a clue. Even if you recognise it for what it is, it comes with a suite of beliefs attached, which are in turn held in place by things like fear of failure, unwillingness to take risks, and a strong desire to stay safe. It’s potent stuff.

Even if we’re aware of the strength of our big assumption, and its impact, we still experience it through not achieving our goals. Sometimes, no matter how much we intend to do something, no matter how hard we try, it still doesn’t happen. We get caught, we’re held in a curious loop, stuck running a hidden script, and whether we like it or not the big assumption wins… yet again. Our unconscious keeps us trapped in the status quo, actively preventing change.

Gym attendance is an excellent example!

Here’s a really common example. Plenty of us struggle to get enough exercise even though we know it’s essential for our long term health, and a lack of it reduces our lifespan. We know for certain that exercise is vital, but we still only go to the gym now and again, despite determined goal-setting and an ongoing series of fresh starts, including New Year resolutions. But the second something business-related comes up, we gladly throw out our plans for exercise in favour of work.

The big assumption behind the issue is that if you don’t deliver and you’re not responsive enough, your livelihood will suffer. And that means not going to the gym comes with a powerful so-called secondary gain. On the other hand, this secondary gain doesn’t bear close examination. If you lose your health, your career goes down the drain anyway. And this leaves you in a tricky double bind.

Add to that the lazy part of us, the part that just wants to relax and chill out after a hard day’s work, and no matter how hard you try to convince yourself the gym’s a good thing, it’s so hard to get up and actually leave the house.

Robert Kegan and Lisa Lahey’s take on Immunity to Change

According to the method laid out in the Immunity to Change video developed by Co-founders of ‘Minds at Work’, Robert Kegan and Lisa Lahey, you need to identify the big underlying assumption that controls you, then test it both evidentially and experimentally. It’s about looking for the secondary gain beneath the surface, and identifying the belief or assumption underpinning it. Uncovering what you’re unconsciously protecting.

While part of you really does intend to achieve the goal or focus you set yourself, another part doesn’t want it at all, the part that works quietly in the background, the thing that holds you in a double bind. You won’t be aware of it but it runs an entire line of argument, a powerful set of avoidant actions, all unconsciously, and that means there’s an almighty internal tussle going on!

Not all big assumptions are wholly negative. Some have some wisdom attached to them. But whatever its character your big assumption needs to be dragged out into the daylight, dusted off, and carefully unpicked to find out what’s going on. Only then can you add real choice back into your life.

What is the Immunity to Change approach?

Executive coaches can use the Immunity to Change approach. It is highly effective approach for coaching. Here are three videos you’ll find helpful that explain it in detail. The first is from Lisa Lahey, who introduces the idea:

In the second video Professor Robert Kegan talks about Immunity to Change, explaining how he works with the process. He asks why there’s often a gap between a person’s intention to change and what they actually do. He says there’s a deep need for new ways of thinking about what’s in the way of someone’s genuine intention, examining exactly what prevents them achieving their goals:

The third video, below, features Lisa Lahey giving a live demonstration of the Immunity to Change approach, a video called Finishing What You Start:

This illuminating video clearly guides the viewer through the process in action.

The questions asked by Kegan and Lahey are designed to reveal an underlying big assumption, one that then has to be tested rigorously to establish its reality… or reveal it’s actually unrealistic.

These are the four phases to uncovering that underlying key assumption.

1. Start off with goal-setting – What, exactly, is your goal? Say you want to delegate better, something you have always struggled with
2. Take an honest self-inventory – what’s stopping you changing? What’s the hidden worry or fear you have around the goal? What are you doing or not doing instead?
3. Identify any hidden competing commitments. If you want to delegate more, a competing commitment might be that you’re scared of missing a good opportunity or of falling behind. Maybe you’ve committed yourself to being 100% independent. Maybe you feel you have to be capable of doing everything yourself
4. What’s the big assumption? It could be that depending on other people, failing to do absolutely everything perfectly on your own, damages your self respect. Is that realistic, or even likely? Now you’ve applied systematic logic to the issue, you can see your big assumption isn’t realistic, and it is definitely not helpful. And that makes it easier to change – knowledge and understanding – more awareness provides greater choice and personal agency.

This method is powerful, a creative and revealing way to get the insight and information you need to drive positive change and help you achieve the goals you previously kept on missing. If you’d like to buy the Immunity to Change book, click here to find it on Amazon 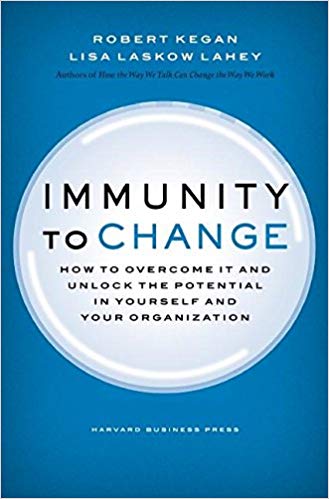 Stop being your own worst enemy!

There’s no need to struggle any longer. Do get in touch, if you’d like to dig deeper and find out what is holding you back. We can help you uncover that big assumption and actively question it from all sides, then make informed choices about the best way forwards. We can discuss how coaching can help you follow-through and achieve the change you want to make.